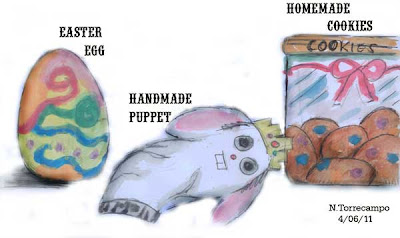 Let us not forget the true meaning of the Lenten Season. Happy Easter, everyone!

After much reluctance to reveal the real situation,  the  authorities have now officially raised the nuclear reactor accident in Japan  to the highest alert level similar to the Chernobyl disaster. However, the effects of radiation to people’s health and the environment are still being downplayed by governments and the mainstream media.  Misleading and false information regarding nuclear radiation and the dangers of exposure, particularly to lower levels associated with long-term adverse effects,  continue to dominate whatever news is available to the people.  Lives are at stake and this nuclear disaster  is not something to trivialize.  People, collectively and individually, should seriously begin to take steps to protect themselves from the nuclear radiation fallout and the inevitable contamination of our environment and our bodies.

Here are some suggestions:
1.       Get as much information as you can and don’t just rely on official sources. Seek out independent sources of information and study  the issue carefully. Seek out and consult independent experts if available. Be especially wary of commercially syndicated  media  which usually dish out government and industry viewpoint.  Make use of the internet but be aware that even Google is being accused of suppressing alternative media.

2.       Join or link with pro-people groups working on the specific issue or related issues. Make use of social networking and encourage other groups to be involved in the issue. Initiate discussions on different aspects of the issue (health, environmental, social, political, economic). Obtain as often as possible any information on radioactive contamination  (air, soil, water, plants, animals, and food) and be guided accordingly. The greater the contamination, the more stringent protective measures should be undertaken. If there is no available information locally, demand from the government that they undertake such monitoring. It is the government’s obligation to do so. If the government does not do anything, exercise people power!

3.       Learn, develop and implement practical mitigation and protective measures. Avoid exposure to radioactivity as much as possible. If radioactive fallout is likely in your area, stay indoors, especially if it rains. Rains increase the fallout of radioactivity from the clouds.  If you get wet, put your clothes in a wash area and take a shower. Leave umbrellas, raincoat, and shoes  outside and prevent rainwater from entering the house. Do not use rainwater for drinking or home use. Close doors and windows and prevent outside air as much as possible from entering your rooms. Install air filters on windows if feasible. Do not use air conditioners. Wear activated carbon filter mask if you cannot avoid exposure to outside air. Stock up reasonable amounts (depending on severity and duration of projected radioactive fallout)  of  basic survival provisions, especially water and food.  At this time, it is probably reasonable to have adequate provisions for at least a month.

5.       More stringent protective measures should be accorded to the vulnerable members of the community such as pregnant women, children, senior citizens and those with pre-existing illnesses, especially those with compromised immune system. These groups, especially pregnant women and young children,  will be more susceptible to the adverse effects of radiation even at extremely low doses.

Radiation monitoring by government agencies is grossly lacking. The current monitoring being undertaken  by the Philippine Nuclear Research Institute cannot reasonably reflect the true levels of radioactive fallout in the entire Philippines. The sampling of a few  imported food products from Japan being done by the Food and Drug Administration  is grossly inadequate and does not provide reasonable level of protection to the public. It is not true that the levels of radioactivity measured in a few instances of sampling are “safe.” Comparing these measured levels of radioactivity to those from natural sources is inappropriate and misleading. The toxicologic  effects of radioactive particles from a man-made nuclear reactor are different from the radiation effects from natural sources and a comparison of equivalent doses of radiation between the two  is not correct.  Even very low levels of radiation exposure can lead to cancer and other illnesses.  There is no safe dose.

An expanded and more systematic  radiation monitoring should be done. Air monitoring in more representative areas of the Philippines should be undertaken, especially in areas facing the Pacific Ocean. Soil deposition of radioactive particles should also be done as well as monitoring of radioactive bioaccumulation in fish, plants and animals. Radioactivity monitoring of food imports should done more extensively, including imports from countries which are most likely contaminated also by significant radioactive fallout (e.g.,  milk and milk products from the US and Europe).

Radioactive fallout projections from various sources indicate that the Philippines is already being subjected to significant amounts of radiation coming from Japan and will  most likely continue to be so for at least several months. It is in the best interest of the people to take the precautionary approach based on best available evidence, assume the worst case scenario  and immediately institute protective and mitigating measures.

Dr. Quijano also recently testified at a Senate inquiry on the effects of nuclear radiation.

No summer plans yet for the whole family as of this posting. hihi. But I requested the kids to list down their own plans or what they intend to do for the whole summer. Here’s what they have to say.

How about you, do you have special plans for the kids this summer? Share it with us at Mommy Moments. Click on the badge right above this post to get you to more entries this week. See you around. Happy Sunday! 🙂