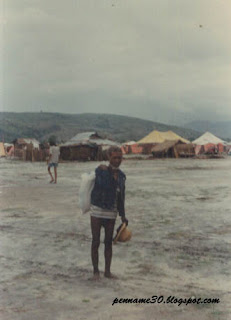 Barely a year after Mt. Pinatubo erupted, I joined the group of employees from the National Housing Authority (a government agency) who conducted a food relief operation in Zambales in 1992.

I took this photograph of an elderly Aeta just before he walked away carrying the relief goods he received from NHA representatives.

Mt. Pinatubo eruption is considered as the second largest volcanic eruption of the 20th century. The volcano was dormant for 500 years until its eruption in 1991.

Hundreds of people have been killed during the eruption as thousands others were left homeless, including out brother Aetas.