N (holding a microphone) in Baro’t Saya. It was an Independence Day program where she played the role of Mrs. Marcela de Agoncillo, who designed and sewed the Philippine flag (as it looks today).

This was taken during a school field trip at the Aquinaldo Shrine in Cavite.

The picture was taken at La Salle Greenhills Gymnasium in 2004. It was the site of the national tabulation center of NAMFREL’s (National Citizens’ Movement for Free Elections) Operation Quick Count for the 2004 National Elections.

I’m the one in black blouse. With me are fellow reporters from the Philippine Star, Philippine News Agency and Manila Bulletin. We’re waiting for updates and or briefing from Namfrel people during the counting of votes. It was one of the tedious coverages for me because I have to be at the sight in the morning until around 7 pm. I was required to inform the desk of new figures and latest happening from the site. I covered the event from May 10 until the first few days of June (I think). 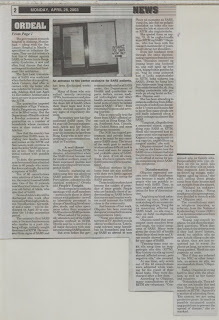